How did the “Great Boat and Cake Race” go? 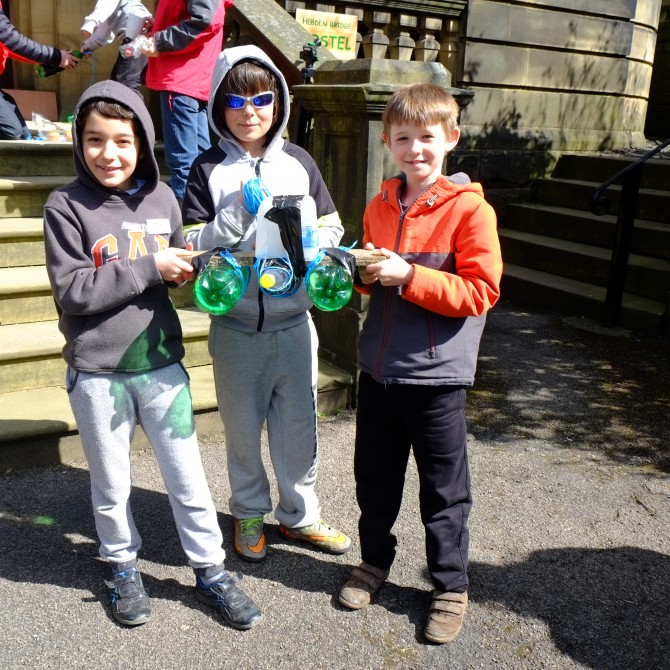 On Sunday April 17th we had our Great Boat and Cake Race workshop.

The sun smiled on us for the latest taster, lighting up the main hall in the Birchcliffe as we began the day with Anil and some very energetic yoga, followed by meditation. We call it preparation for learning as it brings mind and body together into the here and now. There were 9 children in all aged from 9-11 and most of their parents were present too, watching amusedly from their chairs, perhaps thinking their school experiences were not quite like this.

The children began the science lesson with Liva by learning about buoyancy. What is density? Why do some objects float and others not? They carried out experiments, first guessing whether an object would sink or float and then verifying. There were some surprises. They went on to study displacement by weighing objects and also the water that they displaced to see if the water was heavier than the object, thus ensuring it would float. Finally with clay they experimented with the same volume of object in different shapes, hollow, or flat to see if the shape affected the ability to float.

This kind of work is normally done in KS 3 but all the children who were of primary age understood because it was imaginatively explained and they could immediately experiment to test the theory. Being in a small group of nine meant they received plenty of attention from the teacher and relations among the students were calm and positive. It was wonderful to see how naturally excited they were about learning.

Dale came in next to teach them how to tie knots in preparation for the boat making. This was followed by a marvellous vegetarian lunch made by the Real Junk Food Project, nourishing, ethical and tasty. After playing for a while the children did a short meditation with  to remember what they had learned in the morning and to start imagining how they were going to apply the knowledge to boat-building. We then went to the front entrance of the Birchcliffe in glorious sunshine to build our boats using wood, plastic bottles, string and tape.

The children were concerned about their cakes falling off or getting wet so they produced some ingenious cake-carrying devices. With Dale they worked quickly and by 2.30 we were at the stream’s edge in Nutclough Wood, ready to try our our boats.

The boats were to be pulled over the water with a long piece of string. This had to be tied to a stick and thrown from where the boat was released to where it would end up. Of course sometimes the throw did not make it to the other side, allowing the top-quality wellie wearers to show off as they waded into the stream. Not one cake fell off and all the boats floated. Prizes were awarded for the quickest, the most leisurely boat, the most aero-dynamic, the sturdiest, the most elegant and the best cake protection. Of course the prizes were more cakes!

For a video of one of the boats, click here:

What some parents said in their feedback:

“Thanks so much for yesterday. My son thoroughly enjoyed himself. He asked if he could go full-time, starting straight away!! He was disappointed when I explained that you wouldn’t be open until September!” …Lucy

“Thank you for the workshop ‘taster’ day. My son loved it and we thought the teaching was exactly how teaching should be. He was interested and engaged in the lesson and most importantly has retained the information and shared it with grandparents this evening.” …Lorna

Thanks to everybody for making it a wonderful day of joyous learning. We at Hebden Bridge School work hard to create a learning environment that enriches all and we cannot do this without the collaboration of the children and their parents.

Thanks to all of us, our wonderful school is coming together!