How did our workshop on the floods go? 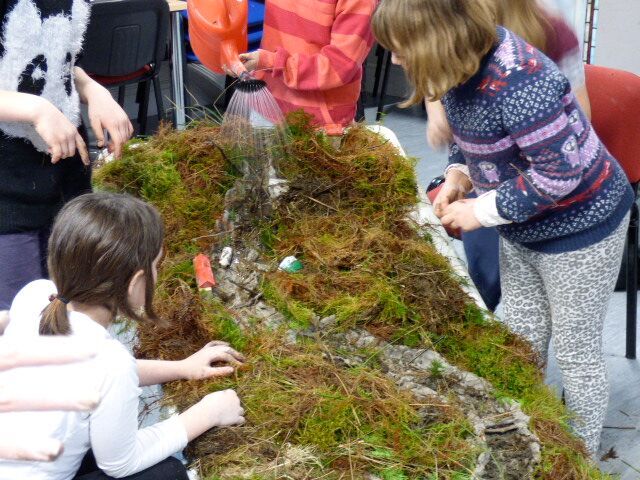 Our taster on January 24th was called “Understanding the Floods”. We had a group of nine eager year 5s and year 6s who began the day with yoga and meditation with Anil with such focus that you could hear a pin drop in the room.  We then went up to the mezzanine for some experimental learning with Liva and Zoe.

First, we discussed how features in a landscape can influence the way water descends from the high lands into valleys where flooding occurs.

Two tables were set up at a 30° angle with waterproof bags to collect water.  On one table a permeable material was placed to replicate flora while the other was left with its smooth plastic top. Two children stood at the raised end of each table and tipped watering cans onto the surface to see how much and how quickly the water descended. Then the children used clay to add a river to the landscape, straight on one table and meandering on the other and repeated the experiment. Then they added a lot of “trees” and vegetation, terraced the valley side using clay, added yoghurt pot reservoirs to the meandering river table, while using less of these features on the straight river. The effect was remarkable. We could clearly see how hardly any water got to the bottom of the table when vegetation and meandering held the water back. While the other table saw water flowing quickly and collecting at the bottom to form a pool in the bag.

After discussing the findings of our experiment, we had lunch made by Incredible Farm and then went outdoors to look at a real river. The children were able to understand why the water came down the valley so quickly and why that contributed to the recent floods.

The day finished off with an art session where students studied how feelings could be represented through colours and reflected on how they felt about the floods, painting onto paper using watercolours.

It was a wonderful day where everybody developed their understanding and expressed their feelings and thoughts about the floods. Old friendships were renewed and new ones began to blossom. One student said it was “An inspiring day.” and that it helped her deal with the bad memories of the floods. Another said he now wanted to become a geologist!

Our next workshop will be called:

“What would your ideal school be like? –Democratic education, have your say!”